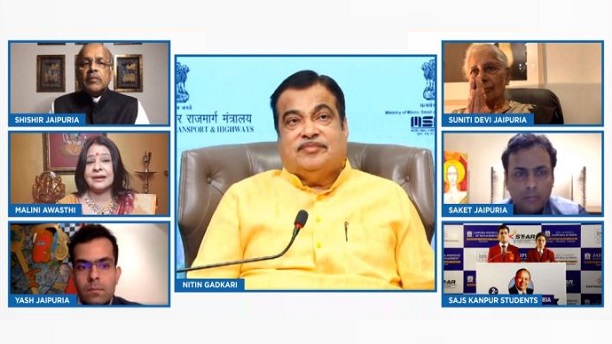 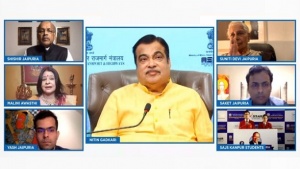 The lecture was organized by Jaipuria Group of Educational Institutions, and had a pertinent topic: Role of Leadership In Turbulent Times. Appearing virtually on the Facebook page and YouTube channel of Seth Anandram Jaipuria School, Gadkari stressed, in his speech, on the importance of strong and visionary leaders to show the way forward in times of crisis.

The increased relevance of decisive leadership in a world disrupted by the Covid-19 pandemic was apparent throughout the minister’s speech, but the lecture had a much broader range, and the takeaways from it can be applicable to turbulent situations for people from all walks of life, be it politics, business, sports, or entertainment.

The event began with a soulful rendition of the invocation song by the Padma Shri award winning folk singer, Malini Awasthi. The song was followed by a welcome address by Shri Shishir Jaipuria, Chairman of Seth Anandram Jaipuria Educational Society (SAJES).

Feting Gadkari, the Chairman said, “Our nation is indeed blessed to have leaders like you when every citizen is concerned for his own self and his family, and is looking up to leaders for reprieve and protection. Your dynamic vision and decisive leadership…are leading our country towards Atmanirbhar Bharat.”

In his speech, the Chairman also reminisced about his father, Dr. Rajaram Jaipuria, an industrialist and educationist, in whose honour the memorial lecture has been conceptualized. He described Dr. Rajaram as a ‘Karma yogi in every sense of the word’.

Citing instances of leadership and its role in turbulent times during his illustrious political career, Chief Guest Union Minister for Road Transport, Highways Shri Nitin Gadkari pointed out that leadership plays a key role not just in politics, but also in other fields of life, such as education, business, social work, and even religions. Good leaders take lessons from history. It is often said ‘Old is Gold’. I say we should give the maxim its due. The inspiration and motivation that leaders derive come from history, education and reading the biographies of the great leaders that have come before.”

He further added, “Have vision, you can donate eyes, but you can’t donate vision. The vision comes from books, history, educational institutions, family, work places. Positivity and self-confidence are the crux of decisive leadership. True leaders inspire team work and collective team spirit is very important. My learning comes from 3 Cs: cooperation, coordination and communication.

During the event, a Green Certificate was handed out to Gadkari by Yash Jaipuria, member of SAJES. The lecture concluded with a vote of thanks by Saket Jaipuria, Vice Chairman, Seth Anandram Jaipuria Group of Educational Institutions.

Thanking Gadkari, Saket Jaipuria said, “The purpose behind organizing this lecture-series is to draw attention to some important subjects of topical nature that have national or international significance. I am glad that the topic of the lecture today has generated considerable interest, and your words of wisdom will stimulate further discussion in different forums.”

1
Hi, I am interested in Jaipuria School Varanasi
Powered by